D–S–C–H is the first improvisation that I did on the piano since beginning college. I was a very fresh-minded young musician and at this point I had not developed any real technical or compositional skills. Even in this earliest work, however, I can see threads of creative ability and the early echoes of a burgeoning improvisational practice that would come to shape the majority of my output over the following five years.

The improvisation could be loosely defined as being in the A Phrygian mode, although it is harmonically varied throughout. Generally the work dances around the key-centers of A and D. As it has a highly cyclical structure to it, I would not have a problem with calling it a theme and variations, with the introductory theme comprising of mm. 1–8.

For the purposes of this and future discussions, when I refer to measures I will format them as [page#:measure#], e.g. the above “mm. 1–8” will herein be written as [1:1–8]. If the need for reference to a specific beat arises, I will include a third number in parenthesis. For an example, see the following paragraph. I have found that this system is the most efficient way of relaying the exact information needed for the reader to find which section that I am referencing in the score.

One fascinating harmonic motif that I see throughout can be seen in [1:5(4)] going to the downbeat of [1:6]: realized with a key-center of D, it would be V7/V—i. This is a common motif that I will come to use in many future works, a sort of revival of the Medieval double leading tone cadence. I will later that year fall into a bit of a “Renaissance discovery” and the theory and works of Don Carlo Gesualdo, John Dowland and William Byrd will have a big influence over my sound.

While the double leading tone cadence is traditionally considered a Lydian cadence, I will later go on to use it instead as a minor cadence, especially in my song cycle A Poe Tragedy (2014), for baritone solo, mixed choir and piano:


Generally one can see a great deal of tonicization through D–S–C–H, and the root seems to float regularly between A, D and even F.

At [3:32–36], for instance, there is a strong implication of an eventual D minor resolution, but rather than treating the recurring V—iv—V—iv—V… as a setting up for a key change, I instead neutralize the A Major chord in [3:35] and keep the piece grounded in the A key-center: 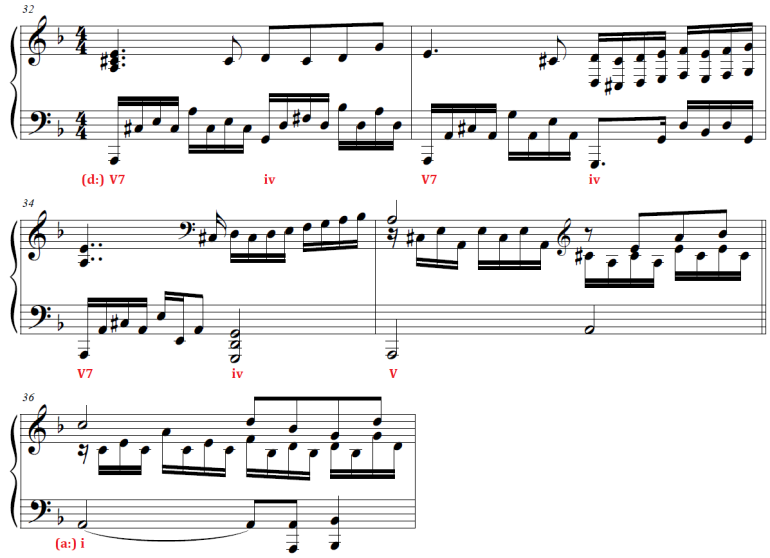 Likely as an accident of my temporary metric modulation at bar 32, I maintain a presence of 4/4 through the rest of the work, including the pseudo-chorale ending. The voicings used in this section are not terribly well-conceived, but given my lack of training—or experience improvising—at the time, I do not fault myself for this fact.

Overall it isn’t a terribly remarkable piece, but it serves as a good basis for the large amount of future improvisations to come. It may be interesting at a future date to “reimprovise” this piece, borrowing most of the original harmonic and thematic elements but with my newer, radically modernist bent, so as to gauge how my artistic ability has changed over time.